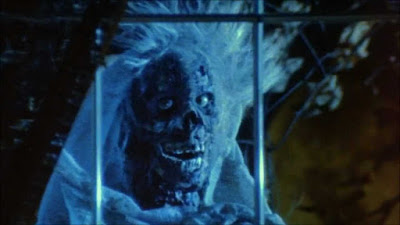 Creepshow is set to be revived as a series for Shudder this week, and I thought there was no better way to prepare for show (which is already getting solid reviews) than to watch the original movie. I've already talked about the sequel on this site a while ago, but Creepshow remains unexplored territory.

Creepshow is a good example of a dream team coming together and having success. George A. Romero and Stephen King team up at the peak of their power for this. Both were influenced by the horror comics of the 1950s and the film is formatted as a bit of a homage to these comic books. The animated transitions between the shorts haven't aged really well, but its still enjoyable. Its definitely well edited for its time with some scenes taking place in comic book panels. The movie is composed of 5 shorts in all, each written by King. Some are original works written for the movie and some are previously existing short stories from King.

With most horror anthologies its normally clear to fans which segments are believed to be the best and which are the weakest. I find that Creepshow is a rare exception. People always seem to have their own choices for the best segment and that is probably why the film is still considered so enjoyable today because the segments are consistently solid. 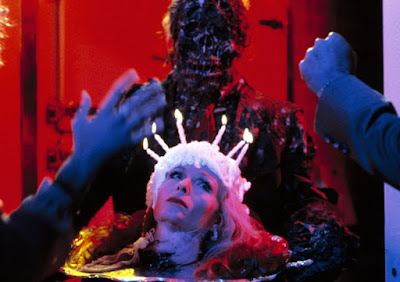 The movie kicks off with a short epilogue featuring Tom Atkins and Stephen King's son Joe King (now known as the horror writer Joe Hill) where a father rips a Creepshow comic from his young sons hands and threatens him for having it. The shorts begin immediately from there while the comic stirs in the wind while sitting in a trash can.

The first segment is Father's Day, an original story where a family party gets interrupted by the reanimated corpse of the family's rich miserable old patriarch who was killed by one of his daughters who he was abusive to. This one is worth a watch just to see a young Ed Harris doing a pretty goofy dance. The segment has one of the best uses of Tom Savini's practical effects. The monster has aged fairly well, and the segment sets the tone for the rest of the movie, which never really takes itself seriously at all.

The second segment seems to be the one that is the most criticized. Stephen King takes a rare acting role. He's known to do cameos, but this is one of his larger appearances, and he appears to have a lot of fun in The Lonesome Death of Jordy Verrill. This story is one of the more simple stories and its mostly memorable because of King's ridiculously campy performance. He plays a simple man who is terrorized by a invasive alien plant. 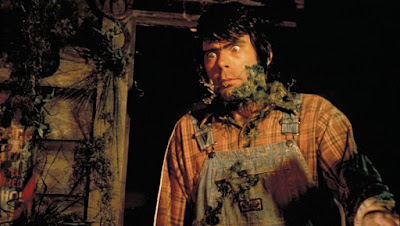 Something to Tide You Over is a candidate for my favorite story in the movie. Leslie Neilsen is able to balance his usual goofiness while playing a completely unhinged psychopath who goes out of his way to torture two young lovers (or more accurately his wife and her lover). Ted Danson plays one of his torturees who swears to seek vengeance on his captor, who buries him in the sand to drown when the tide comes in.

The Crate is one of the stories based on one of King's previous works. Its probably the longest story of the lot and it does feel like its a little too long. Savini's effects steal the show in this segment once again. Adrienne Barbeau is pretty solid as a completely unlikeable, bitchy, drunk wife. The creature is very well designed, the story itself seems quite simple for how long it is, but it does have to build up a bit of a mystery around the crate itself.

The final story is probably the one that is honestly the most scary, whether its the strongest segment overall or not. A crazy EG Marshall stars as a crazy rich germophobe whose remarkably clean apartment is invaded by some dirty cockroaches and he dives into complete insanity trying to get rid of these bugs. George A. Romero said years later that about 250,000 cockroaches were used in the story. Its tough not to get creeped out by this one, especially if you have problems with bugs.

Creepshow is one of those weird movies that makes me feel nostalgic even though it wasn't a movie that I watched as a kid. I feel the urge to come back to this movie often. The first time I watched it was when George A. Romero died a little more than 2 years ago now and I've come back to it twice since. Romero's effort during this movie is one of the main reasons it succeeds because most of the stories are fairly simple on their own. I feel like Creepshow is a good candidate for a new horror fan. I've thought from the outset that it has a lot of potential as a series and I can't wait to see it get started later this week.