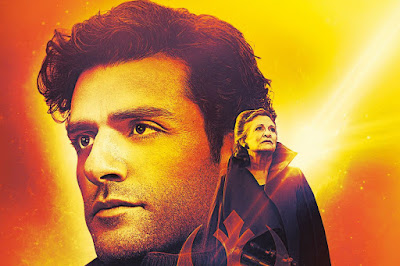 Resistance Reborn is an ambitious primer to The Rise of Skywalker. With each new saga film release Lucasfilm always releases material with small hints as to what may come in the upcoming movie. Resistance Reborn is an honest prequel to the movie. Previous books in the Journey to.... line tend to remain a safe distance away from the movie, this is a book featuring many of the sequel trilogy characters and its very rooted in canon.

The book is written by Rebecca Roanhorse, who is a new Star Wars writer. One of the biggest compliments you can give a Star Wars writer is if they are good at anchoring their story into the galaxy. Roanhorse appears to have read a lot of the other Star Wars material, because she works characters written by other authors into her own story and this story feels very well researched. I enjoy when Star Wars books can build on characters that we already know rather than create new ones. Resistance Reborn will only be more enjoyable if you've read Charles Soule's Poe Dameron comic, Claudia Gray's Bloodline and Chuck Wendig's Aftermath trilogy, although if you haven't read those stories this could still be a good jumping on point.

Resistance Reborn picks up very shortly after the end of The Last Jedi. The Resistance was able to survive thanks to the sacrifice made by Luke Skywalker, but they are very weakened and in need of new recruits and ships. General Leia's transmission to her allies seems to have failed and they need to think of another plan.

Of the sequel trilogy characters I felt like Poe and Leia were the best developed in this book. Rey and Finn do play a bit of a supporting role. I'm sure the burden of being the last Jedi is a burden to Rey and she keeps to herself for a lot of the book and doesn't see a lot of action. Poe's mutiny has begun to weigh on him, but he chooses to bounce back and lead. Leia is very worn down and still feeling the effects of her space walking stunt. I wouldn't be surprised if that is how they explain her role in The Rise of Skywalker, which is likely going to be limited.

The aftershocks of Poe's decisions in The Last Jedi have left him feeling like a failure, but he also knows that he has no time to dwell on it. He must simply do the best he can to lead. Of our trio of new heroes at centre of sequel trilogy is probably the one that is the least developed, but now some more advancements have been made and Roanhorse has made Poe a more relatable character.

Leia is another highlight. Sometimes I forget that The Force Awakens and The Last Jedi occur so close to each other. When you think about it Leia has endued more loss in the last two movies than she may have in the original trilogy all together, her son (in the metaphorical sense), her husband, her brother, and the New Republic are all gone. Although the other members of the Resistance are quickly beginning to fill the void left by all the conflict.

Two other very welcome additions to the story are Wedge Antilles and Nora Wexley. Up to this point Lucasfilm was pretty tight lipped about what happened to both characters post Aftermath trilogy. It was great to see them back involved in the story again. Nice to see another non-Skywalker family involved in the fight. Wedge was especially well written in the story and there is a scene in the book where Wedge learns of Luke Skywalker's death that really hits hard. Even though we rare see Luke and Wedge on screen together its always been shown in canon material that they are friends. Most of the key members of the Star Wars saga are aware that Luke died, but reading about someone learning that information for the first time really made an impact. This was the first time that Wedge an Nora's romantic relationship was truly confirmed and they are much older now, so I enjoyed seeing this couple interact now that they are much older than they were in the Aftermath era.

Roanhorse also includes some other popular characters from other canon material, like Battlefront II and some other characters that were originally crafted by other authors. Some of them take up a fair amount of the book, but also don't steal too much attention away from the leaders in Poe and Leia.

Much like The Last Jedi, this book really hits home that the Resistance is on its last legs. At this point in the book they are really down to a few ships, and a few dozen members. They are truly forced up against the wall, to the point, where logical people would probably give up. Although the First Order has secretly been capturing Resistance sympathizers and kept them in a work camp. There is a list of those captured that the Resistance hopes to get their hands on.

The book's villains are mostly characters that we haven't met before. General Hux and Kylo Ren are nowhere to be found. I do think our villain Winshur Bratt is not exactly a memorable one, and he's not really likeable at all. He's embraced the First Order ideals and does some bad things in the book, but this was not really the type of story that called for one of the high ranking villains to be involved.

Overall I think Roanhorse's effort is one of the strongest ones in Star Wars canon. Its a great book for fans like myself who have worked hard to follow as much material as possible. She also seems to be fan and has a good grasp on the characters. I sure hope she gets another chance to play in this galaxy again.