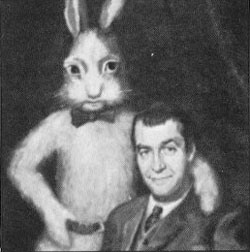 I've always sort of seen Jimmy Stewart as Tom Hanks before Tom Hanks. I've never seen a movie with him in it where I didn't love him. He's one of the ultimate good guys in movie history. Its a Wonderful Life, Vertigo and Rear Window are among his most famous works.

This month I've been trying to check out some movies that were released in 1950. Early on in this mission I realized that there are 3 James Stewart movies released in 1950. So it only made sense to marathon all 3 movies in a day. These movies aren't really ideal for a triple feature, because 2 films fit together nicely, but one sticks out like a sore thumb. Although there are a couple actors that appear in two of the 3 films as co-stars to Stewart. 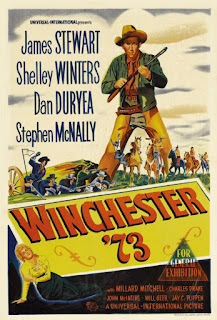 Feature 1: Winchester '73 (1950): Winchester '73 details the journey of a priceless rifle that is stolen from Stewart and passes through many hands while Stewart and his sidekick played by Millard Mitchell try to get the gun back. The film is the first collaboration between Stewart and Anthony Mann, who worked together several times over the 1950s, mostly in the western genre.

Stewart is definitely the star, but there is a bit of an ensemble cast, so there are times where Stewart disappears from the screen for long stretches. The movie often focuses on whoever has the Winchester rifle at the time. There are plenty of veteran actors in the cast: Shelley Winters, Dan Duryea, Will Geer, Charles Drake and Stephen McNally (who plays the main villain, a past rival of Stewart's character) are all featured. It also features early roles from Rock Hudson and Tony Curtis. Like many westerns of the time it features some native Americans, which does tie into the third film of the marathon.

Stewart is a bit more of an anti-hero. This role is probably the least likeable character of the 3 films. The film is considered a western classic. I found it to be fairly solid. 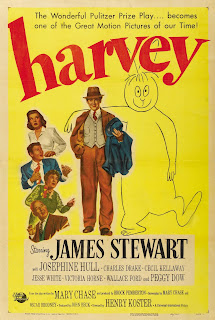 Feature 2: Harvey (1950): This was easily my favorite of the triple feature. Harvey is based on a play. Not only is Stewart effortlessly likeable in this its possibly the most likeable character of his career. Stewart plays a charming man, whose best friend happens to be an invisible white rabbit. Stewart's character Elwood P. Dowd seems to be able to make a friend wherever her goes. The plot sounds a little Donnie Darko-ish, but the plot is surprisingly universal.

The film is a screwball comedy with a lot to offer in terms of themes. Stewart's character is heavily judged by his family to the point that you feel bad for him, but over the course of the film you realize he's living his best life and the character actually becomes an inspiration.

Stewart's sister is played by Josephine Hull, who played the character for the stage version. She won an Oscar for the role. Stewart was nominated as well. Charles Drake, who was also in Winchester '73 plays a psychiatrist in this. 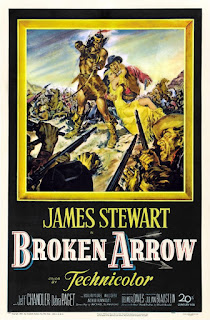 Feature 3: Broken Arrow (1950): Broken Arrow was a trailblazing film in its era. So I chose to view it that way rather than spend time criticizing the more problematic elements of the movie. Its a film about white people and natives learning to make peace in the old west. At the time Native Americans were often the villains of westerns, but Broken Arrow is actually pretty respectful with their portrayal (for the era at least).

Stewart plays a man who develops a relationship with Indian chief Cochise. The pair form a mutual respect and they launch peace negotiations with the white people. Stewart's role could fit into "white savior" territory these days and there are several white people playing Native Americans. Most notable of all is Jeff Chandler, who plays Cochise. Chandler got an Oscar nomination for the role and actually outplays Stewart as the wise and moral leader of the Apaches. There is an awkward relationship with Stewart and a teenage native played by Debra Paget (another white person). Otherwise this is a film that I can respect for what it gets right rather than hate it for what it does wrong.

Will Geer from Winchester '73 also pops up in this western. This time he's an antagonist. Broken Arrow got several Oscar nominations at the time, but it seems that Winchester '73 is looked at more favorably now, even though it didn't get any nods. I'm sure the more dated aspects of the production contribute to that.